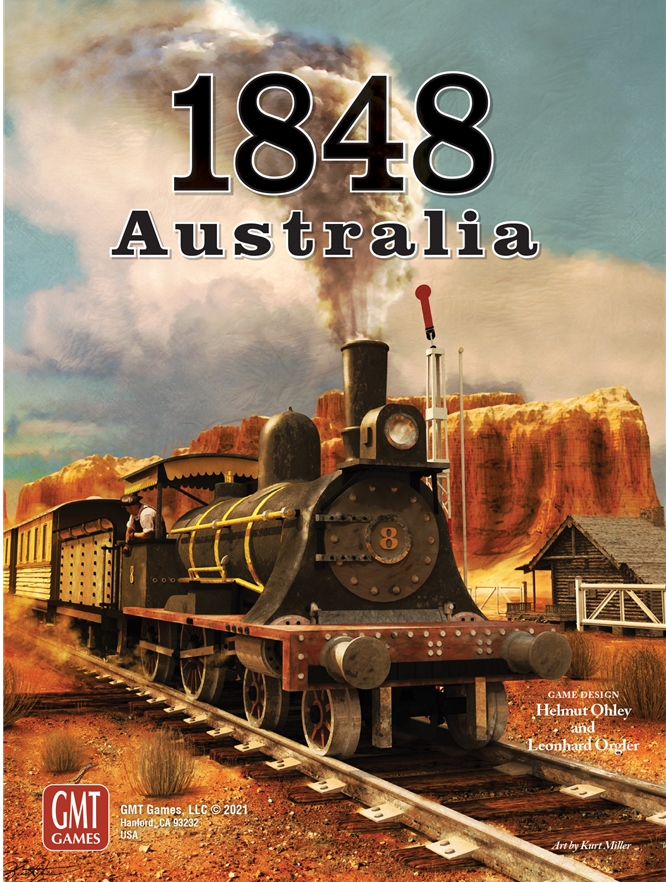 Australia's first railway company, the Sydney Railway Company, was founded in 1848. It proved ruinous for its founders.  Shortly before the opening of the first line, it was taken over by the New South Wales Government Railways. In 1852 eight privately financed railways were planned in Victoria. Three of them were established but only one of them was a success -- The Melbourne and Hobson's Railway Company which was opened in September 1854.

Many types of railways, which during the next 150 years came into being over the whole country, supported industries such as mining, sugar plantations, logging, metal works, and cement factories. For the most part, they were owned by the industrial companies themselves and were therefore called "Private Railways" in order to distinguish them from the main railways owned by the States.

1848: Australia is a semi-historical railroad game for 3 to 6 people. It is based on the game 1829 by Francis Tresham. Historical constraints have, as far as is possible, been taken into account. In other areas, history will be written anew.  1848 features the inclusion of The Bank Of England as a public company that extends loans and administers railroads that are in receivership, dealing with the different track gauges between states, and 'The Ghan' special train.

1848 has simple mechanisms at its base. The yellow, green, brown and grey tiles are placed on the map to form a network of routes, connecting stations together. The trains (train cards) make notional journeys from station to station, thereby earning money. The (imaginary) travellers pay for their journeys. The more and the more important the stations a train visits, the more money it earns for the company and its shareholders.

In the game, you and your fellow players will own 6 Private Companies, shares in 8 Public Companies, as well as shares in the Bank of England. The Public Companies belong to their shareholders. The player with the most shares in a company is its Director and decides what the company will do. You will operate your companies, invest in others, buy better trains, and compete for routes. At game-end, players computer the value of their shares and add that value to their operating profits to determine their total wealth. The player with the most wealth wins.