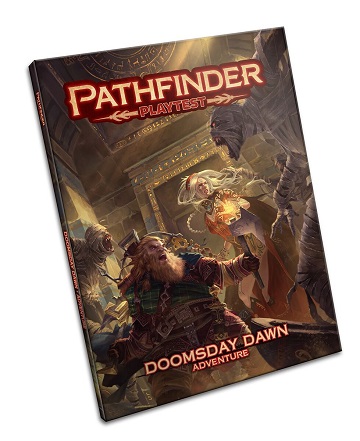 Mysterious ancient artifacts from the early days of desert-choked Osirion count down the years until a rare planetary conjunction that will align Pathfinder's world of Golarion with the hostile planet Aucturn, allowing the ravenous hordes of the Dominion of the Black to surge forth and harvest the brains of the Inner Sea, remaking the world in their terrible, alien image. Doomsday Dawn takes players on a decade-long journey throughout Golarion as they attempt to understand and defeat the otherworldy menace and avoid utter catastrophe in this 96-page softcover collection of seven multi-encounter scenarios designed to introduce the Pathfinder Playtest rules in a guided shared playtest experience coinciding with regular surveys and feedback from players just like you! (Note: The public playtest begins August 2 and runs through the end of 2018. Due to this limited time window, this book will NEVER be reprinted!)

Designed to work hand-in-hand with the Pathfinder Playtest, a major public effort to test and develop the Second Edition of the Pathfinder rules. Extensive marketing and organized play support throughout 2018, including a world tour featuring numerous convention appearances, a complete overhaul of paizo.com, several blogs from the design team each week, official playtest livestreams on Paizo's Twitch and YouTube channels, and more!
Will never be reprinted.
The Pathfinder RPG has been a leading tabletop brand since its launch in 2008. More than 100,000 gamers play in active Pathfinder RPG campaigns. Pathfinder's monthly Adventure Path product enjoys more than 10,000 readers, making it the best-selling monthly print RPG product on the market.