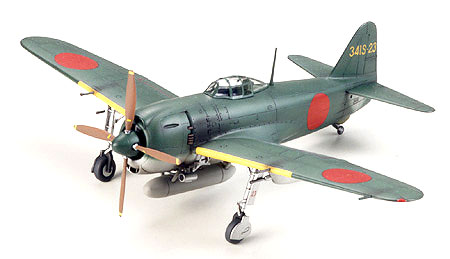 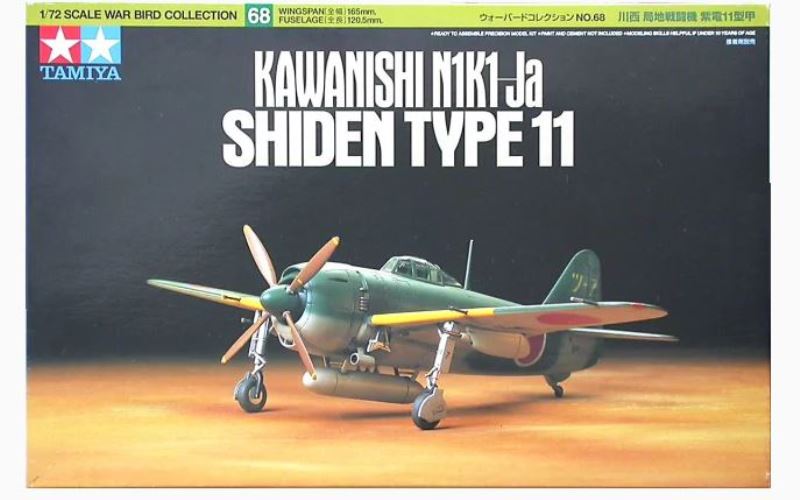 Evolving from the Kawanishi N1K1 "Kyofu" floatplane, the Imperial Japanese Navy's N1K1-J Shiden had a unique pedigree amoung WW2 landplane fighters of the world. In January 1942, the Kawanishi Aircraft firm began adaptation of the Kyofu into a land based fighter, strictly as a private venture. This project was soon officially authorized under the designation N1K1-J, with the first prototype flying in December 1942. The airframe was basically the same as its predecessor, with main landing gear and tall wheel replacing the floats. In place of Kyofu's Mitsubihi Kasei engine, a more compact and powerful Nakajima Homare engine was installed. Excellent performance and superb maneuverability was achieved using this engine, however it brought about serious problems. In order to use all of the available power in the engine, a large diameter propeller was required. This required unusually long main landing gear legs, because of the midwing configuration. This caused difficulties in the landing gear retraction system. Kawansihi engineers managed to solve the problem by introducing telescopic main landing gear legs. The complex gear system and unreliability of the engine, plagued the N1K1-J throughout its career, until the introduction of the improved, low-wing N1K2-J Shiden-Kai. About 1,000 N1K1-J fighters were produced and were active around the Phillipine islands, Formosa, Okinawa and over the Japanese Island of Honshu.