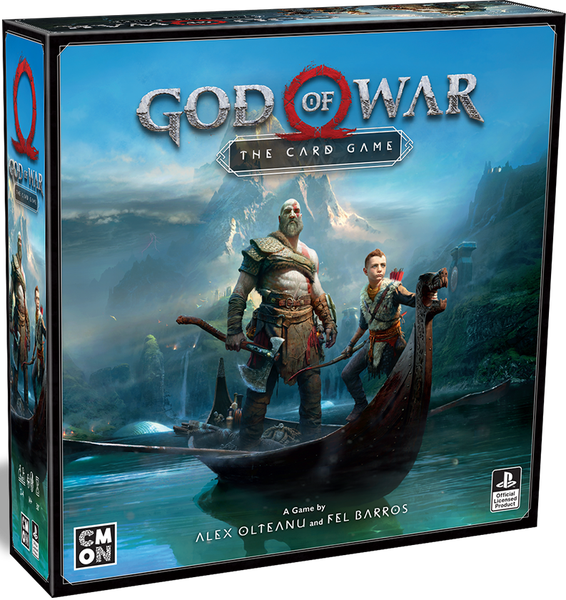 God of War: The Card Game

Ragnarök is coming. The fate of all existence is at stake. Is destruction inevitable, or are there ways to avoid ultimate cataclysm? The Norns, mystical beings of great power, have decided they will not go quietly into oblivion and have turned their attention to the well of Fate, UrÃ°r, in order to find any possible way to stop Ragnarök. Looking deep into the swirling waters, they can foresee which potential combination of heroes, villains, battles, victories, and defeats might stop the end of all that is known but will they find the right combination in time? Is there any true path to salvation at all? They must hurry and seek the true way through, before all is lost.

In God of War: The Card Game, players take on the role of the Norns as they try different combinations of heroes and events in order to stop Ragnarök. Each game is a new attempt to find the right key to saving Midgard from destruction. Players must work together, embodying mighty heroes such as Kratos, Mimir, Atreus, Brok and Sindri, and Freya. They will fight enemies and bosses from the popular God of War video game, but combined and remixed in exciting new ways, creating unique "What if...?" scenarios each time they play. If they succeed, the way forward has been secured and Ragnarök can be halted. Failure means the Norns will have to try again as only death and destruction lay along that particular path.

Each quest in God of War: The Card Game is made up of a mosaic of cards that recreate monsters and locations from the video game. Each quest's mosaic is different, and each card is double-sided, depending on whether a section has been destroyed or not, and each has special rules that go into effect when it is face up on the tabletop. Learning how each quest is won, as well as what strategy to employ, is key to victory.

As players progress, earlier quests have an effect on what comes after them. At certain points along their path, players must choose which quest they will complete. Completing one might grant a bonus, but quests left untouched result in dire permanent consequences as the players move forward. These choices and challenges lead to new strategies, making it so no two games of God of War: The Card Game are alike.

Heroes in the game have several elements that make them unique. Each comes with their own dashboard that explains their special abilities and health totals, in addition to tracking the number of cards a player can keep in their hand from round to round. Tokens are used to keep everything clear as heroes gain and lose health and build up their power so they can unleash a mighty special attack. Heroes begin the game with a unique starting deck of cards that will be augmented from additional decks as the game progresses. Players can construct their deck to focus on their strengths or look for ways to generalize their approach, preparing for future quests that lie ahead. Each hero also has a unique standee that indicates which portion of the mosaic they are facing. With multiple heroes from which to choose, numerous ways to build their deck, and various different quests to attempt, each game of God of War: The Card Game will be a new experience that will echo throughout eternity.