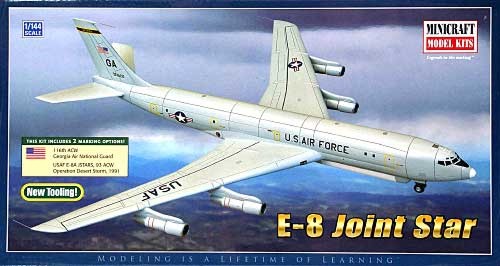 "Joint STARS" stands for Joint Surveillance Target Attack Radar System. The JSTARS aircraft is based on a modified Boeing 707. It was designed, in a combined United States Army and Air Force program, to detect and locate enemy armor at ranges out of the normal troop forward area. Being a fairly new platform, and still under development, they showed their true worth during Operation Desert Storm in 1991. The USAF flew these aircraft on 49 combat sorties, chalking up more than 500 combat hours. They were able to track mobile Iraqi forces consisting of tanks and even their Scud missiles with 100% mission effectiveness. The most noticeable feature on this aircraft is the 40ft long radome under the forward fuselage that resembles a canoe. This feature houses the side-looking APY-7 phased array antenna.