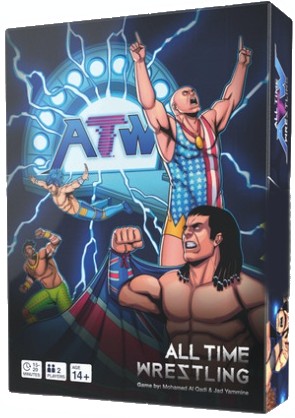 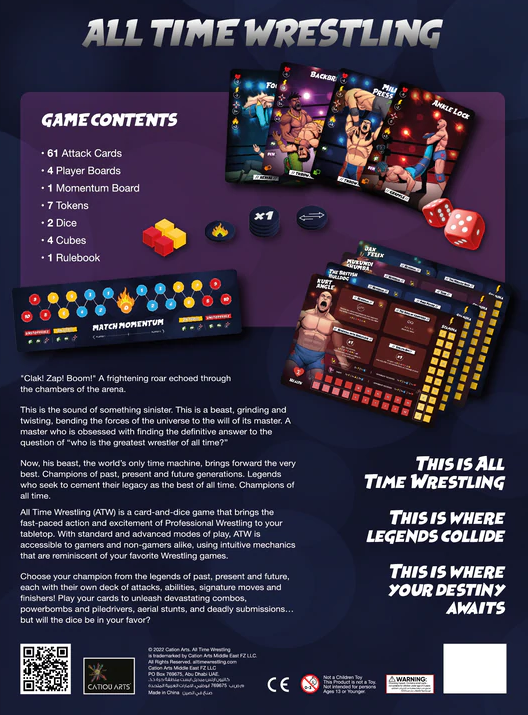 Clack! Zap! Boom!" A frightening roar echoes through the chambers of the arena. This is the sound of something sinister. This is a beast, grinding and twisting, bending the forces of the universe to the will of its master, a master who is obsessed with finding the definitive answer to the question of "Who is the greatest wrestler of all time?"

Now, his beast, the world's only time machine, brings forward the very best — champions of past, present and future generations. legends who seek to cement their legacy as the best of all time. This is where legends collide. This is where your destiny awaits.

All Time Wrestling is a card-and-dice game that brings the fast-paced action and excitement of professional wrestling to your tabletop. With standard and advanced modes of play, ATW is accessible to gamers and non-gamers alike, using intuitive mechanisms that are reminiscent of your favorite wrestling games.

Choose your champion from the legends of past, present and future, each with their own deck of attacks, abilities, signature moves, and finishers! Play your cards to unleash devastating combos, powerbombs and piledrivers, aerial stunts and deadly submissions...but will the dice be in your favor?